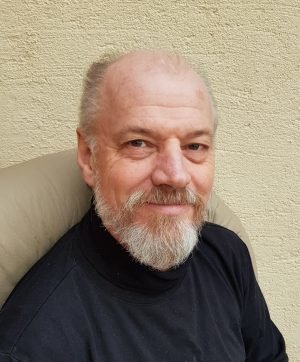 Guy Needler MBA, MSc, CEng, MIET, MCMA initially trained as a mechanical engineer and quickly progressed to become a chartered electrical and electronics engineer. However, throughout this earthly training, he was always aware of the greater reality around him as he caught glimpses of the worlds of spirit. From his teens to his early twenties, these glimpses drew him to read extensively the spiritual texts of the day, and meditate intensively. Then, he was told by his guides to focus on his earthly contribution, so he subconsciously scaled back the intensity of his spiritual work. When Guy reached his late thirties, he felt the call to return to his spiritual roles. The next six years saw him becoming a Reiki Master and pursuing a four-year commitment to learn energy and vibrational therapy techniques from experts in the fields. He studied with Helen Stott, a direct student and teacher of the Barbara Brennan School of Healing™ (BBSH) methodologies. As a prerequisite for attending BBSH based courses, students were required to pursue personal development and psychotherapy via various methodologies like the Pathwork™ methodology described by Susan Thesenga and other methodologies developed by Donovan Thesenga and John and Eva Pierrakos. His training and experience in energy-based therapies has resulted in his being a member of the Complementary Medical Association (MCMA).

During his training as an energy healer (1999-2005) Guy discovered that he was able, via meditation, to traverse the frequencies above those associated with the Auric layers. It was during these “trips” to the higher frequencies that he discovered he could communicate with the energetic entities that existed on the various levels of our multiverse. These entities included the OM, beings created from the energies of the original manifestation who pervade the omniverse that is the Origin, the creator of the God of our multiverse, the Source Entity, its peers, the co-creators, and the creator of the co-creators itself, the Origin (referred to as the “Absolute” in Hindu texts).

Guy quickly established a constant and robust communicative link with these entities, circumnavigating the need for deep meditation, journaling the “channeled” communications as he progressed. It is these journalled channeling’s that resulted in the manuscript for The History of God.

During 2008/9 the manuscript for The History of God was offered to many publishing houses, including being sent directly to Ozark and those who work with Eckhart Tolle and Neale Donald Walsch, which resulted in little response or letters of encouragement but “full” portfolios and no offers.  Still motivated, he continued to work on tidying up another manuscript that was to be a prequel. Then, on New Year’s Eve 2009, whilst on a retreat from the hullabaloo of Christmas and New Year’s celebrations in an old smugglers inn located in Morwenstow, Cornwall, he received an email from Julia Cannon of Ozark Mountain Publishing offering a contract. Feeling inspired he quickly worked on completing the prequel and posted it to Ozark in April 2010. Upon receiving the second manuscript Dolores herself said that this needed to be integrated into the manuscript of The History of God as it completed the picture by including the process of his awakening and the entities contacted along the way. During August 2010 Guy attended a meeting with Dolores and Julia during a UK tour and instantly felt that he had met some of the members of his spiritual family. Dolores herself worked on the integration of the two manuscripts, which Guy feels is a great honor. The History of God was released in June 2011 and Guy was invited to speak at the Transformation Conference hosted by Ozark in Rogers, Arkansas. He subsequently accompanied Dolores and Julia during their UK tour later that year, in the London, Cardiff, Birmingham, Bristol and Manchester locations, giving a short presentation on his work and introducing Dolores to the audience. He has been interviewed by Dolores on her BBS Radio Show and by Kevin Moore presenter of The Moore Show. You can see these and other interviews on the interviews page of this site.

He continues to receive and record information from these entities and has produced Beyond the Source, where he is in exclusive dialogue with the co-creators, establishing details about their own multiversal environments and the entities that occupy them, and the sequel called Beyond the Source – Book 2, which completes the dialogue with the co-creators. A further book, The Origin Speaks focused upon the creator of The Source Entities – the ultimate creator, taking the information about the “Greater Reality” to even greater depths. A stand alone book, Avoiding Karma, derived from a serise of blogs, teaches the student how to live a karma free life in one incarnation – being “in the physical but not of the physical”. His sixth book, The Anne Dialogues describes the detail behind what we really are and how and why we incarnate.  Guy is currently working on his seventh book, The Curators ,  discusses those entities that maintain the structure and evolutionary efficiency of the Multiverse. This is due for completion and presentation to Ozark Mountain Publishing in August 2018.

Guy has been holding a series of world wide workshops since 2012 to teach the techniques he developed to traverse the frequencies, whilst working on methods of strengthening his own spirituality, expanding and deepening the level of his awakening.

As a method of grounding, Guy likes to cycle in the countryside. He also practices and teaches Aikido and is a 6th Dan National Coach (Shidoin) with 36 years’ experience. He is currently working on the use of spiritual energy within the physical side of the art.

I BUILT MY SITE FOR FREE USING